A TV news production, or any kind of video production for that matter, takes a lot of time and effort. With video marketing and video, in general, becoming more and more popular, there has been a rise in demand for video production services.

One of the main reasons why video marketing is becoming very popular among business owners is because the video medium is one of the best ways that businesses can reach customers effectively. In fact, it is highly recommended that you incorporate video content into your marketing strategy.

It’s great for customer conversion, social media marketing, and SEO, all in one. With all of that in one marketing strategy, it makes sense why a plenty of businesses are looking to hire video production companies to incorporate this into their marketing strategies.

While it is a highly effective method of marketing, some people balk at the idea of video marketing because it is rather more expensive than other marketing methods, and for many marketers, it is a very unfamiliar concept.

If this sounds like something that you’re familiar with, fret not, we’re here to help. We’re going to explain the ins and outs of the video production process to help you be more familiar with it. We’re going to talk about the individual roles of the production, from the producer, the director of photography, the tech guys, all the way to the production assistants. In addition to this, we’re also going to talk about the process of creating a video production to help you be more knowledgeable about this.

What are the Roles in a Video News Production? 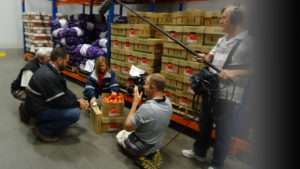 Each and every single person has an important role in the production, no matter how big or small their role is. To help you get a better feel for it, here are some of the most common roles that you’ll find in any video production.

The director is the most involved person on any production set. They work with the producer to find crew members that fit the needs of the production. Directors are involved from everything from talent management to the script. Not only that, but they are also involved with the more technical aspects of the job, such as camera positioning and lighting.

If the director is the guy who comes up with the ideas, the director of photography is the person who brings these ideas to life. The DOP in video production works with the most technical aspects of the production, since they have to work with the cameras, lights, and everything else to achieve the look that the director is looking for.

Fairly straightforward, the camera operator handles all camera operations as directed by the director of photography.

Lighting plays a huge role in setting the mood of any video production. The atmosphere is a significant factor in setting the tone for the video. For example, you wouldn’t use overly dark lighting in corporate documentaries, in the same way, you wouldn’t use overly bright lighting for a horror film/video. Lighting can go a long way in dictating how your video’s tone and the mood is going to play out.

Of course, audio is a very crucial part of any video production, and there’s an entire role dedicated to audio alone. This is where the audio technician comes in. They handle everything to do with the audio and work closely with the director of photography and director.

This is where a lot of people in the production industry start out. Some people view it as a low position, but if you know how to learn on the job, it can be a fantastic opportunity.

With technology being what it is and the number of skilled videographers in the market today, more and more of these video production professionals are looking to enter the video production industry as a one-man band. These solo teams handle everything, so they’re the producer and editor, also known as a preditor, as well as the director all in one.

What is the Process of Creating a TV News Production? 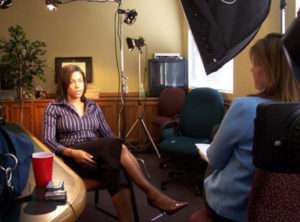 The reason why this step is so important is that this step will help determine the course of the entire production. The project timeline, budget allocation, script, cast, goals, etc. are all determined during the pre-production process.

The production process where the actual filming occurs. You shoot the scenes you need, set up the lighting, and set up the audio that you’re going to need for your production.

Post-production is where you clean up the entire video. This is where you edit the scenes, put them together, and basically finish the video to create the final product that you submit to the client.

At BA Productions, we have a fully functioning video production crew that can answer your video production needs when you need it. We’ve been working in the video production industry since 1992 and come highly recommended by our clients for our ability to deliver timely, high-quality video work. If you find yourself in need of a video production project don’t hesitate to call us at 877 378-7225 and we can get started today!