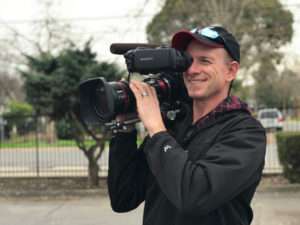 The feature covers the entirety of Compton’s video production career, from his humble beginnings at a small television conglomerate in the San Francisco Bay Area in the year 1992. This is where he kicked off his career with a variety of general production tasks, handling everything from camera operations to studio light setup.

The feature then goes on to follow the next step of his career in 1995 and talks about Compton’s stint in a local production house, where he was given the opportunity to learn about the ins and outs of broadcasting and the television network industry.

The next part of the feature talks about several of Compton’s investments into his professional gear, which allowed him the freedom to achieve his professional goals and work on several high-profile broadcasting and corporate jobs.

While other filmmakers would have been discouraged during the slow winter seasons, Compton turned this into a strength, finding his niche in winter video productions, working on films in the middle of literal snowstorms. This went on for 15 years.

In 2008, Compton took things to another level by purchasing a deep powder snowmobile and a custom mount to hold his tripod. This move gave him the ability to access locations that would have been difficult to reach via snowshoeing. This access led to his production of the documentary, “Rotaries, Avalanche on the Mountain”, which aired worldwide on PBS in January 2014.

The feature winds down with an overview of the state of Compton’s current career, which is a mostly freelance endeavor, giving him the freedom to work with all sorts of clients from his home office. Having always possessed a versatile skillset, he shoots everything from documentaries and reality television segments to promotional and training programs for major corporations.

Finally, the feature focuses on Compton’s open-minded view regarding the video production industry today, with quotes in the feature such as, “Keep yourself open to learning from your colleagues and take away something new from every experience in the industry”.

Brendon Compton’s dedication to the craft and the industry in each and every single one of the video projects that he takes on is one of the many reasons why he is recognized as a prominent figure within the industry. To read the full feature on Assignment Desk, click https://assignmentdesk.com/friday-feature-brendan-compton-cameraman-editor-and-producer/.

If you want to learn more about the kind of work that we do at BA Productions, feel free to check out the rest of our website, or better yet, reach out and give us a call today!